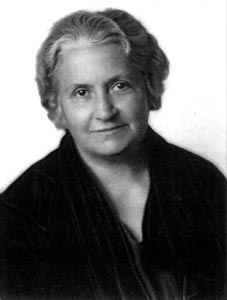 Maria Montessori was born in 1870. Throughout her early years she was very interested in science and engineering. She wanted to become a medical doctor. Because she was a women, the establishment turned her away but she persisted time and again until she gained entry into Medical School.

Her initial work was with mentally challenged children in a psychiatric ward. In time, these hospitalised children learned to read and write and her work gained national attention.

In 1907, she opened the first Casa de Bambini (Childrens House) in Rome, Italy where slum children were brought in order to remove them from the streets. Her experimental work produced miraculous results with children blossoming far beyond their years into abstract learning through the use of concrete materials. It was a process based on observation of the child followed by the child’s self education in a prepared environment.

By the time of her death in 1952, Maria Montessori had developed a comprehensive framework for revolutionising education – quite distant from the mainstream of conventional, governmental education.

Her ability to observe and reflect on her observations created a totally new context for the child’s learning. The context for Montessori education is a prepared environment developed on the basis of humanity’s fundamental needs and tendencies.

The philosophical foundation of the Montessori approach is based on the premise that education should be an aid to life. Respect for the children’s personality and trust in their inner potentialities are prerequisite to the establishment of a healthy learning ambiance.

Montessori asserts that education based on her discoveries would bring forth nothing less than the birth of a new human. She identifies the goal of education as “the development of a complete human being, oriented to the environment, and adapted to his or her time, place and culture.”

Today we extend this by asking the children to question deeply what they see. We hope they will be able to explore creative solutions and develop personal integrity so they are ready to meet whatever life may bring.

Nova accomplishes this by preparing environments based on the age of the learner, so that individuals from birth to maturity are able to grow and understand themselves and their relationships to each other as well as the natural world.

In ‘To Educate the Human Potential’, Maria Montessori proclaims “the fundamental principle in education is the correlation of all subjects.” By cosmic education, she refers to an approach to learning that provides the largest possible context for understanding how everything is related. Through this approach children come to realise humanity’s relationship to the whole. At all levels, Nova teachers emphasise humanity’s responsibility to the Earth community.

The Montessori approach to life and learning combines freedom with responsibility, a more active role for the children in their learning and academic excellence based on each person’s potential contribution. It also provides for social awareness and moral development, as well as a vision of humanity’s relationship to the whole.

“Our educational institutions need to see their purpose not as training personnel for exploiting the Earth, but as guiding students toward an intimate relationship with the Earth… In this context we might consider the intellectual, political and economic orientations that will enable us to fulfill the historical assignment before us – to establish a more viable way into the future.”

This is a 21st Century interpretation of Montessori’s call for an education that would bring about a new human being.

Role of the Teacher 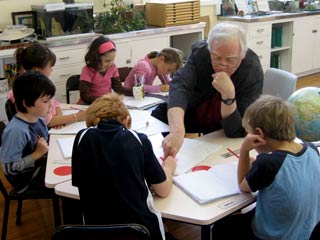